THE 'LOST OR TOSSED' BLOODY EARRING

Very soon after I first met the Smarts back in December, 1997, one of the first conversations we ever had was about the earring. Denise and Stan explained to me that no one from the Sheriff's Department ever told them anything about an earring.

It wasn't until they attended the deposition in 1997 that the subject of a 'found earring' ever even came up. "That was news to us", they told me.

By the time you have an 18 year old daughter, she is pretty much in charge of her 'earring department' and so Mom and Dad are not going to have a detailed inventory of all of a teenage girls accessories.

"Still', Denise told me, "we wanted to see that earring just in case it was one that we did in fact recognize."

'What's past is past'. Now Stan and Denise wanted to make the best of a bad situation and during one of their trips down from Stockton, they asked to see the earring. (I don't know the exact conversations - but for some reason, "'right now' was not a good time to see it", was the refrain they were met with.)

​This back-and-forth went on for a few times and the Smarts ended up going back to Stockton having never seen the earring.

As time went on, the Smarts' emotions (as raw as they were back in 1997) began to bubble to an determined boil. They decided to drive back down to SLO unannounced.

They marched into the Sheriff's Department, told them they were there to see the earring and "we're not leaving until we see it", they said.

it was only at that point that Stan and Denise Smart were informed that the Sheriff's Department could not locate the earring.

The truth is we do not know what happened.

Was the earring intentionally made to disappear by some corrupt SLO Deputy employee after a 'payoff' from the Flores family? Maybe, but probably not. Was it just 'sloppy' work of someone in the 'chain of command' at the Sheriff's Department? Perhaps.

I say 'sloppy',  because of an email I received from a Kristin supporter who sent me a very interesting article. The article had to do with a famous 1998 case in SLO where a tourist named Andra Hug's death was quickly declared 'accidental' after falling off a cliff.  7 years later her case was declared a homicide.

Gary Hoving, then a deputy with the SLO Sheriff's Department was asked if there was a big cover-up in this case because the eventual suspect was a police officer from Grover Beach. (Read his quote in the graphic below). 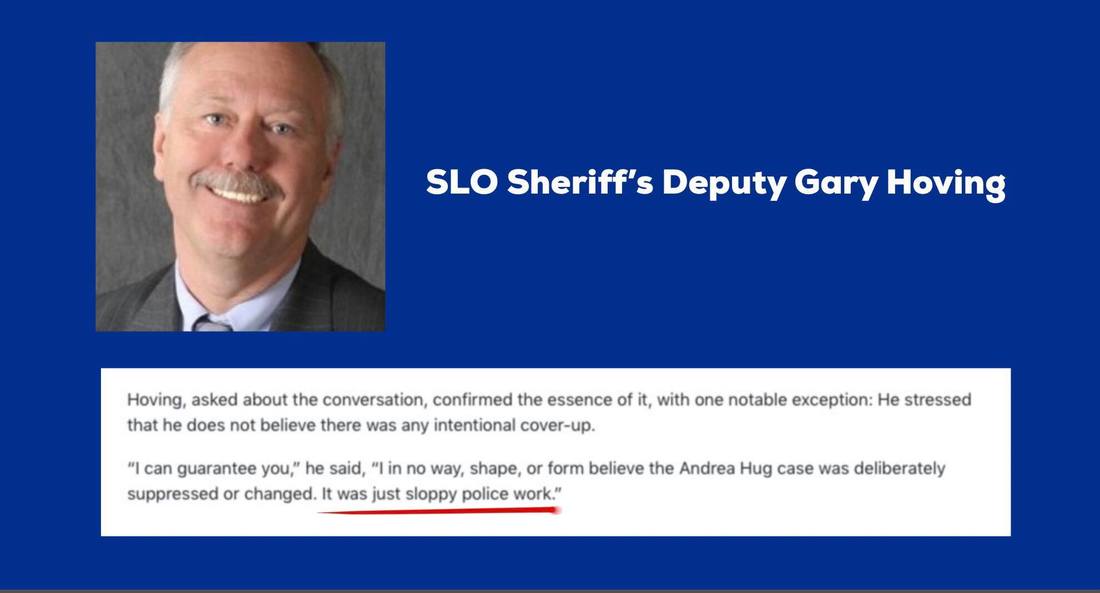 NewTimes SLO article
Obviously, just swith out the name 'Andrea Hug' for 'Kristin Smart' and you will most likely have your answer.

​So, it really may in fact be just 'sloppy' police work. That cannot be good news for the Smart family. Either way is bad. The Smarts are living this nightmare.

****Important Note**** [The dried substance on the earring resembled 'blood' to the people who saw it. To be fair and honest, we do not know if it truly was 'blood' because the Sheriff's Department 'lost or tossed' it somewhere along the line.

Back in February of this year, 2018, I emailed Sheriff Parkinson and asked him about what was ever done regarding the earring. He responded:

"I am sure you know that the earring happened way before my time
and the records of discipline were poor and I truly have no answers."

Heck, I believe him!

All the proof you need is SLO Deputy Gary Hoving testifying that the 'Andrea Hug' mess was most likely due to sloppy police work. This was 14 years before Ian Parkinson became Sheriff. He walks in on Day 1 and is confronted with 'sloppy police work' that has been sitting in some file for over a decade. Sheriff Parkinson is starting behind the 8-ball.

So yes, I believe him. I am hesitant to tell a Sheriff how to do his job but I will tip-toe cautiously down that path on this one only because we are over 22 years into this. (What have we got to lose, right?) May I suggest this, Sheriff:

​At the end of this effort, it may in fact become clear that it was just 'sloppy police work'. That has nothing to do with you.